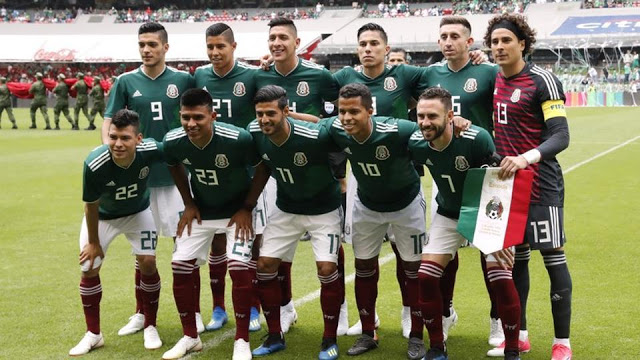 Members of Mexico’s national football squad held a farewell party with around 30 prostitutes before the team traveled to Europe ahead of the World Cup, reports said Tuesday.

According to the TVNotas gossip magazine, nine members of Mexico’s World Cup squad partied with dozens of escorts at a private compound in Mexico City last Saturday following the team’s 1-0 win over Scotland at the Aztec Stadium.

The magazine published grainy images of players arriving at the party under the headline “The true farewell of the Tri!”.

However, Mexican officials said the players involved will not be sanctioned because they attended the party in their free time.

Guillermo Cantu, general secretary of the Mexican Football Federation, said the players would not be punished because “they have not missed training.”

“A free day is a free day and those are the risks that one runs with freedom,” Cantu was quoted as saying.

Among the players in attendance were goalkeeper Guillermo Ochoa and Benfica striker Raul Jimenez.

The Mexico team is already in Copenhagen, where they are preparing for a friendly against Denmark on Saturday before heading on to Russia.

The controversy echoes similar scandals which have swirled around the team in recent years.

In September 2010, Mexico players partied with women after a game in Monterrey. On that occasion, all participants were fined while defender Efrain Juarez and forward Carlos Vela were suspended from the selection for six months.

In June 2011, shortly before a trip to Argentina to participate in the Copa America, Mexican players hired sex workers in a hotel in Quito, Ecuador. They were fined and suspended from the national team for half a year.

First off, nobody is really sure what actually happened yet. It looks like Mexican tabloids might have twisted this story a bit and there are reports saying the women weren’t actually prostitutes. However,  based on Hector Herrera missing practice and some of the past behavior from some of the El Tri lads… things aren’t looking great.

Look, i’ve never been in a position where an entire country is depending on me to perform at the highest level so I’m not judging. I have no idea what it’s like to even have maybe more than two people depending on me at one time. Sometimes when I’m super stressed I resort to some simple vices. Smoke a little weed, maybe have a few beers. Normal people shit.

Imagining myself overwhelmed with anxiety and surrounded by thirty prostitutes honestly sounds like my worst nightmare. Very few people on this Earth can have that type of blowout and go straight into a high pressure environment. This is some next level degenerate shit. Almost Maradona all coked out warming up before games type of debauchery.

I was high on Mexico heading into the World Cup, even after they were placed in the group of death. I’m not sure if i’m betting on any team chilling with prostis before the biggest moment in their careers though.  Regardless, the World Cup hasn’t even started yet and we’ve got Messi death threats, Peru showing out, and now this. Are we not entertained?

I’m still pretty damn upset about not qualifying for the world cup, during the game vs. Bosnia most of my tweets were actually targeted at trying to pick fights over USMNT play. Every now and then, like right now, i’m settled enough to think about some of the better things we have coming in the next few years.

We have a ton of talented players that are young and playing abroad. Alot of these guys will start to get looks during the next qualifying cycle and friendlies before the WC. Here are 5 players in promising positions I think we need to see more of in 2018.

Keaton is a bit of an unknown from the Dallas, TX area. He flew under the radar from most of the developmental clubs in the area and went to Portugal to pursue a career rather than college. You’ll find limited footage of him in games, and he has yet to be capped with the USMNT. This year saw him sign a new deal with Benfica seeing him commit to the club for a few more years. He’s athletic/skillful and through the few available clips looks to have a knack for putting himself in creative positions. He’s already made a couple appearances with Benfica’s first team and his a regular for Benfica B. At 20, its tough to say how good he actually is, but is definitely someone we need to keep an eye on throughout the next couple of years.

Shaq has been a household name throughout the US youth ranks and has been in Spain for multiple years. At age 21, he’s already been playing professionally since 2015. He’s an outside back who has seen some time also on the wing for Levante & Levante B, showing he has the ability to add some attacking value in a top European league. It’ll be interesting to see how he gets integrated into the group, but I personally will rip my eyes out if Polster is still getting call ups in the next couple of years over someone like Shaq. Shaq’s been praised by his manager at Levante, and I think we should see his role grow heading into next season.

I’ve been dying to see more of Emerson with the USMNT. He’s been capped twice, but most common fans don’t know his name. He joined Fullham as a teenager in 2014 and is now with Bournemouth. Playing time with Bournemouth has been extremely limited, but apparently it is not due to lack of ability, as he has been praised at Bournemouth. He had a very good showing on Loan last year while at Rangers, and has challenged himself throughout the early stages of his young career. I personally rather see someone like Hyndman in the mix than Nagbe, but lets see if they involve him in the squad this summer. Either way, I think a move is in store for Emerson. Plenty of clubs could use his services, so it’d be great to see another loan/transfer that can propel him into good form.

Rubio Rubin is another “unknown” in the sense that he’s been playing pro since a young age, but we haven’t heard his name much when it originally appeared he’d be a regular. He was most recently with Stabæk before signing with Club Tijuana , where I think he’s going to have an early shot at being a regular in the lineup. He’s creative, strong and fearless in attack – something the US often lacks with robotic “playmakers”. He’s still only 21 years old which seems crazy since he crashed onto the seen a few years ago before struggling with injury/playing time. Below is a video from his season with Utrecht at age 19, which should give you an idea of what he’s capable of in a high level environment. His 10 minutes in the last USMNT friendly gave us a glimpse of his hunger, I’m pretty sure he had the only attacking play i remembered in the whole game. It’ll be interesting to see if he can gain some confidence in Liga MX to fight for some time next cycle.

Sometimes I feel like we try to hard to give certain players a chance just because of the resume on paper. Christian Ramirez has had a grind of a career and we can arguably say he may have been one of those US system fuck ups. I was really impressed with his play last season for Minnesota United, and people who have followed him for years will say that same player has been there for years. I was really looking forward to seeing him steal some minutes in the Bosnia friendly, but instead we decided to give Agudelo yet ANOTHER chance. Ramirez has definitely earned his opportunity and I hope they give it to him, at age 25 this is probably the lone cycle of his career for the USMNT.